Bormio is an internationally renowned ski resort with the Stelvio ski-run as one of its main attractions.

Set in the amphitheatre of its peaks, Bormio is a ski resort known throughout the world for hosting the World Skiing Championships in 1985 and 200 and the Downhill Race that has been run at the end of December in World Alpine Ski Cup competition since 1993 on its legendary Stelvio run that starts at 3000 m and ends at 1200 m.
Always a popular spot for winter holiday weeks, recent years have brought investments in modern infrastructure and technological improvements in ski-lifts and ski-runs, with facilities for new winter sports as well.

Positioned at the centre of the entire ski circuit, Bormio 2000 rises to the expectations of the most demanding skiers with technical runs laid out for racing, slopes of lesser difficulties for average skiers, and even baby slops for absolute beginners. The modern artificial snow system ensures that almost 90% of the runs are always covered and perfectly groomed.

During the winter, alpine skiers can count on 16 ski-lifts (only for users wearing skis) with 20 interconnected runs having 50 km total distance at altitudes of from 3000 to Bormio’s altitude of 1200 m. Beginners can choose between the beltways at the ski school at Ciuk and another at Bormio 2000. The "Genziana" and "Stelvio" runs are lit up for nightly skiing.
The Snowpark with its super-pipe, series of jumps, rails, and boxes stands at a height of 2300 m. Just one ski-pass lets you ski the three circuits of Bormio, Santa Caterina, and Oga San Colombano, which are connected by free ski-bus even at night.

Cross-country skiers can ski all across the Alute plain (10 km), in San Colombano, and in Santa Caterina or the Piandelvino area in Valdidentro. Upper Valtellina is a boundless reserve for ski touring at every level of difficulty.

You can ski downhill or cross-country all year round in Bormio – even in summer - on the Stelvio Glacier on the pass of the same name. 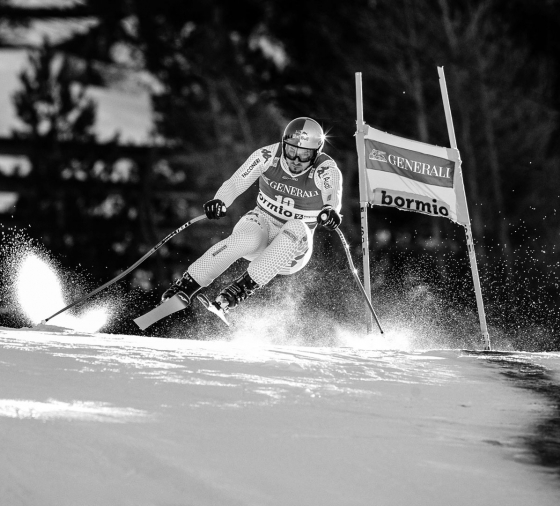